Focal Press announces the launch of FilmSkills, a transformational educational tool that takes film education into the 21st century. Adapted for both individuals and film school instructors, FilmSkills brings Hollywood insiders directly to the computers of a new generation of film students. FilmSkills covers the entire process from writing to distribution and expertly organizes each lesson into 93 multimedia modules.
Posted by Frank Baker at 5:45 PM No comments:

A second grade teacher from California, and his students, explain how they're incorporating ipads into instruction.....creating storyboards and stories.
Posted by Frank Baker at 1:17 PM No comments:

Teachers often focus too much on the technology tools used in the classroom, rather than teaching essential skills to students, says teacher and Teacher Leaders Network senior fellow Bill Ferriter. He writes that educators should focus on abilities students will need in the 21st century, such as collaboration, persuasion and how to present information clearly to their peers. Technology should be used to help students hone those skills, Ferriter added. He is the author of: Teaching the iGeneration
Posted by Frank Baker at 3:33 PM No comments:

5 Great Media Literacy Programs and How to Assess Their Impact

The Center for Social Media's Public Media 2.0 Showcase profiles a series of  media/digital literacy initiatives, examining in particular how project leaders evaluate their impact.
Posted by Frank Baker at 2:28 PM No comments:

The Role of the Media During The Civil Rights Period

Mark your recording calendars for May 16 when PBS' American Experience presents "Freedom Riders." Once again the accompanying website is content rich and will provide classroom teachers many ideas and resources for incorporating this event into instruction. Be sure to see the teacher guide and related materials located here. Of particular interest to media educators:

- The World is Watching: The Media and the Freedom Riders (starting on page 17 of the teacher guide)
- Issues: The Media (which provides additional background as well as streaming clips)

Award To Recognize ML In Teaching

The Fair Media Council's Media Savvy Teacher Award is designed to recognize 4th, 5th and 6th grade teachers who are using news and promoting media literacy inside their classrooms.  Teachers anywhere in the United States may enter.  Entries must explain the idea or concept behind the program, how the concept was implemented and how results were measured.  Entries are annually due by June 15 and will be judged by community leaders.
Posted by Frank Baker at 12:54 PM No comments:

Cover Girl is described as an online "consumer self-esteem" game designed to expose "how glossy magazines can subtly tweak images for effect and how you shouldn’t always trust what you first see."

Cover Girl has players joining a fictional "ethics-less" media publisher called Glossip Publications, where they're asked to airbrush and manipulate celebrity photographs to push whatever questionable agendas the editors have in mind.

Players are taken through a series of minigames with each image, toying around with simplified version of photo editing tools to get the desired effect -- slimming arms/thighs/stomachs, removing wrinkles under eyes, increasing someone's bust size, etc.

Not all of Cover Girl's minigames involve making a star look better, though -- in one job, users are asked to touch up an image just enough to make a promiscuous celebrity look pregnant, though not so much that the magazine will be sued. Yeah, it's a pretty despicable job!

Posted by Frank Baker at 1:32 PM No comments: 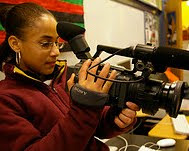 from MacFound blog: Reading World of Warcraft; How online courses can promote deep learning; Peer critique on the Lauryn Hill/ Charlotte Perkins Gilman mash-up; and what kids say is their biggest obstacle to technology in school.
Posted by Frank Baker at 12:31 PM No comments:

10 Tips for Using Social Media In The Classroom

Teachers should use social media in classroom lessons, writes English professor Todd Finley in this blog post, and banning such tools will stifle learning and lead students to question teachers' relevance. Finley provides 10 guidelines for incorporating social media tools in the classroom. He offers several resources and suggests that teachers: create social media rules that are directive, but unrestricted; draw a distinction between academic and informal writing; and promote constructive online discussions
Posted by Frank Baker at 3:08 PM No comments:

It's not often that I link to another blog, but I've just read two wonderful posts (on Literacy, Families and Learning) that I recommend to every K-12 educator. The first post is an introduction to visual literacy; while the second takes its cue from Frank Serafini's recent essay in JAAL on the same topic. This second post, Visual Comprehension, offers educators some excellent guidelines for how to approach visual texts.
Posted by Frank Baker at 11:16 PM No comments:

reposted from the MiddleWeb newsletter "Using infographics is a great way to present information or data in a unique, visual way," says middle grades teacher J. Bartlett. "An infograph can convey information in way that can be quickly understood and absorbed." It can also "emphasize certain points from a lesson or allow content to 'hit home' when students see it visually." Barlett points us to the great blog Free Technology for Teachers where the infographics tag reveals lots of examples across the curriculum. Other resources: The New York Times is famous for its infographics and is teacher-friendly. And for sheer awesomeness, see this infograph on the impact of mobile tech on our lives and these 10 jaw-dropping graphics about education.
Posted by Frank Baker at 10:12 AM No comments: